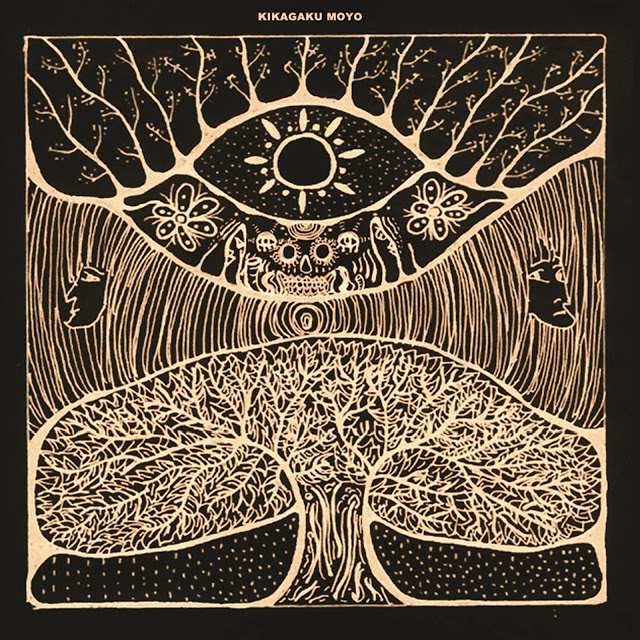 We are excited to announce the debut KIKAGAKU MOYO release, a co-production of Cosmic Eye and Sound Effect Records. Just released as a Bandcamp download in May 2013, it impressed us so much with its awesome otherworldliness, to the point of requiring instant vinyl availability.

KIKAGAKU MOYO (Geometric Patterns in japanese) started in the summer of 2012 in Tokyo attempting to recreate the spirit of the early 70s japanese psychedelic underground. And they have perfected the art of late 60s influenced psychedelia to breathtaking levels. They enrichen this gentle sound with the use of sitars, percussive drums, theremins, wind instruments and charming female vocals, to the point of sounding powerfully spacious and lazily calm at the same time. And they achieve such levels of invention, to not be labelled traditional revivalists but creators of a modern electric music for the mind and body.

There's a beautiful simplicity to this album no matter how far-out it may sound. Each song builds on a formula of direct yet otherworldly folk/psych vibe to subconsciously evolve into a joyous, haunting, and totally colourful, tribal far-out music. Lysergic mind-expanding landscapes, ghostly rhythms, clouds of uplifting fuzz, swirling guitar excursions into space, water-stained sitar licks and beautifuly wasted vocals guarantee a floating magic carpet ride to the galaxy. KIKAGAKU MOYO are on their own deserted island, gazing the cosmos, hallucinating the million details of the One and firing them right back at us.

LP version is pressed on high quality vinyl and comes out in a limited edition of 350 copies. The coloured copies come in yellow with orange and brownish speckles.

and through  Sound Effect Records here.
Posted by spacefreak at 5:29 PM